You are here: Home / Product releases / Erotec Rocket Ride a new design on an old idea

The Erotec Rocket Ride is crowd-funded product (hasn’t reached the target yet) that is basically a vibrating penis sleeve with a remote. In detail, it’s a length of platinum grade silicone with vibrating elements inserted down the length of the product. It has a wire leading from the product to the remote allowing you to change vibrating speed mid coitus. It can be used with a condom to help make up from some the sensation lost from the latex of the condom. 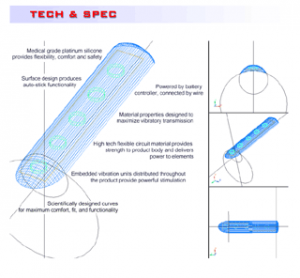 saying goes, ‘it takes two to tango’, and this product seems to take feeling away from the male if anything. The thick silicone would make it impossible to feel anything underneath the Rocket Ride, and it would be very awkward for the male to hold along with the wire and the remote. Sure, it vibrates, but men generally dont seek out vibrators, as it’s the friction of movement that is most pleasurable. So it doesn’t seem like a good trade-off to me.

The Erotec Rocket Ride is basically a vibrating penis sleeve, which is to say, thicker than a condom, takes up a large portion of surface area, and it vibrates.

Now, if for a rather terrible reason your partnership is falling apart due to not being able to please your partner as much as they wish, this product could be a life saver. Because as I said earlier, the Erotec Rocket Ride turns a penis into a living vibrator…kind of. You have to remember that this doesn’t make a penis vibrate, it simply makes a portion of a penis a silicone vibrating pad, which is kind of cool

I think something for the designers to think about is making the remote wireless, as no one wants a remote dangling from a cord leading to their penis.

In conclusion, I would recommend you go and grab a vibrating cock ring that will help prolong premature ejaculation, vibrate and stimulate the penis, and vibrate and directly stimulate the clitoris, while it takes up as little space as possible.

That said, if the Erotec Rocket Ride has a good price tag on it, I would definitely give it a go, if for no other reason that to make her happy and keep things interesting.